Liz Kuhlkin of Schenectady, New York, has been waiting for the chance to return to an event and put her title on the line, and this week she’ll do just that at the 2019 U.S. Women’s Open.

The 2019 event is being held at Texas Star Lanes inside the Texas Station Hotel and Casino, and competition at the second major championship of the Professional Women’s Bowling Association (PWBA) Tour season will kick off Tuesday.

BowlTV.com, the exclusive livestreaming home of the PWBA Tour, will carry all preliminary rounds, while CBS Sports Network will have live coverage of the stepladder finals on Sunday, June 23 at 5 p.m. Eastern.

Kuhlkin claimed her second career PWBA Tour title and first major at the 2018 U.S. Women’s Open by winning four consecutive games in the stepladder, including a 218-196 victory over Stefanie Johnson of McKinney, Texas, in the title match.

The 25-year-old right-hander won her first title as a rookie in 2015 at the PWBA Topeka Open, but she didn’t have the opportunity to defend as the schedule welcomed several new host venues in 2016. 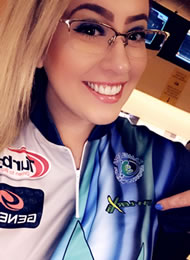 Despite a couple of tough seasons, Kuhlkin put everything together in 2018, culminating with her win at what is considered by many the most prestigious event in women’s bowling.

“It’s kind of crazy to me we’re at this point now,” Kuhlkin said. “It took me a little bit to realize that I’m the reigning champion and I get to defend my title. I’ve had a really solid season so far, and I feel confident about that.”

Kuhlkin’s best finish this season came at the PWBA Tucson Open, where she dazzled the fans by rolling a 299 game in the opening match of the stepladder finals on her way to a third-place finish.

She admitted to being disappointed in her follow-up effort last weekend at the PWBA Fountain Valley Open, missing her first cut of the season.
“Unfortunately, I didn’t really have the best tune-up in Fountain Valley, but to me, that’s kind of old news,” Kuhlkin said. “That doesn’t define me as a player. I’m really looking forward to defending my title, since I didn’t have the opportunity after winning in Topeka in 2015.”

Although it’s a quick turnaround from her experience at Fountain Bowl, the 2019 version of Liz Kuhlkin is a bit more confident entering this event and feels she’s a better, more experienced player than she was prior to her win in 2018.

All of these factors will be keys as she prepares to endure the arduous U.S. Women’s Open.

“I had one of the worst weeks I’ve had on tour, but that happens as a professional,” said Kuhlkin, a two-time Team USA member. “For the next couple of days, I just want to take a step back because that wasn’t me. It was just a bad tournament, and I got to get back on the horse. That’s how it is as a professional athlete in any sport. So, really, I’m just preparing myself for a marathon because that’s what the U.S. Women’s Open is. I’ve proven myself as a champion at this event, and I’m ready to defend.”

This week also holds a major significance on the 2019 PWBA Tour season as it’s the final opportunity for players to earn an exemption into the elite-tour events taking place in August. Following the U.S. Women’s Open, the top 24 players on the 2019 points list will earn an exemption for those three events – PWBA East Hartford Open, Pepsi PWBA Louisville Open and BowlerX.com PWBA Orlando Open.

No matter what happens this week, Kuhlkin’s goal simply is to make match play.

“After this week, I’m not sure where I’m going to be in points,” Kuhlkin said. “It’s tough, but I don’t think I’m going to plunge below that number. My biggest goal this week is to make match play, because I kind of thrive in that environment. I don’t know what it is, but I’m a very intense player when it comes to match play. If I can make it, we’ll go from there and see what happens.”

BowlerX.com is rated #1 for customer service, product knowledge and pricing. Whether you’re shopping for bowling balls, bowling bags, bowling shoes or any bowling accessories you can be sure that you will receive first quality products at the lowest prices.

A part of your purchase will be given back to the sport of bowling through our support of local, regional and national events across the United States. We thank you!

We are an authorized dealer for all of the brands that we offer so that you can rest assured we will stand behind every sale. Our friendly, experienced staff of REAL bowlers are knowledgeable in the products that we offer and are happy to answer any questions you may have.