Congratulations from all of your teammates at BowlerX!!

The Best Bowler ESPY Award has been presented annually since 1995 to the best ten-pin bowler, irrespective of gender, adjudged to be the best in a given calendar year of those contesting the sport professionally in the United States.  Rhino Page was the 2018 winner breaking Jason Belmonte’s streak of three consecutive ESPY’s from 2015-18.

This years ESPY’s will be presented July 10th at 9PM EST on ESPN. 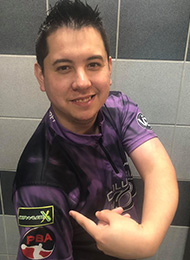 Butturff qualified as the #1 seed for the first two tournaments of the 2019 PBA Tour season, joining Johnny Petraglia, Earl Anthony and Walter Ray Williams Jr. as the only players to be the top qualifier in three consecutive PBA Tour events (going back to the final event of the 2018 season). Butturff lost the title match in the season-opening PBA Hall of Fame classic, but won the PBA Oklahoma Open the following week for his fifth PBA Tour title. He captured his sixth PBA Tour title and first major at the 2019 USBC Masters, qualifying as the #1 seed for the stepladder finals and defeating Mykel Holliman in the championship match for the win.

BowlerX.com is rated #1 for customer service, product knowledge and pricing. Whether you’re shopping for bowling balls, bowling bags, bowling shoes or any bowling accessories you can be sure that you will receive first quality products at the lowest prices.

A part of your purchase will be given back to the sport of bowling through our support of local, regional and national events across the United States. We thank you!

We are an authorized dealer for all of the brands that we offer so that you can rest assured we will stand behind every sale. Our friendly, experienced staff of REAL bowlers are knowledgeable in the products that we offer and are happy to answer any questions you may have.